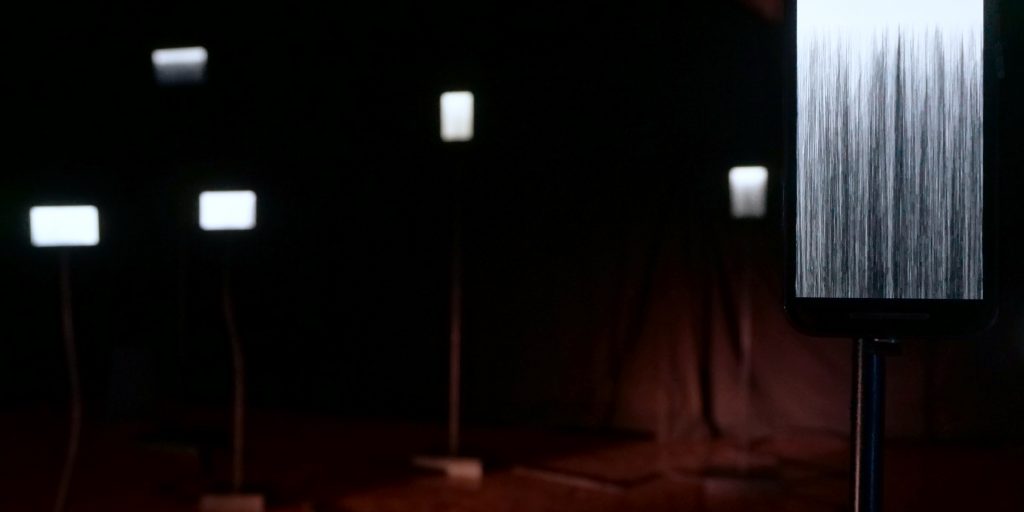 Phonoscopia
Digital participative work for an orchestra of screens

Phonoscopia is an installation designed like an orchestra of screens, where sound and image circulate in a synchronised manner between each fragment that constitutes the multitude of mobile devices used (phones, tablets, etc.). When touching a device, this one becomes a soloist, whereas the others fade out. Poetic texts, which question the connection between the individual and the group, appear on the screen that has been touched.

In this interactive and playful perspective, each device, diverted from its primary use, symbolises an individuality that is both unique and yet linked to others with synergies. The work then rethinks the inluence of each on the network, but also, in the age of GAFAs, the interaction of the network on eachone.

By connecting to the project via the Internet, it is possible to join the network with your own smartphone, which then becomes an additional fragment of the work.

The sound and visual world of Phonoscopia is a maze in which the public can move freely. It is then at the centre of a hypnotic multi-sensory experience consisting of rhythmic games, textures, lights and snippets of texts read or scattered on the different screens. Like an orchestra, soloist devices can emerge, or on the contrary blend into the tutti. In this astounding environment, the double meaning of the term “screen” is revealed: what makes it possible to access information, but also what conceals a reality whose complexity escapes us.

An interactive work, Phonoscopia allows each connected device to reconstruct part of the sound and visual polyphony, and to enrich it by weaving a network of connections. Metaphor of the relationships between the individual and the collective, each connected device can influence the entire network. Like humanity, it is only in the multiplication of its fragments that the work appears to be the most accurate.